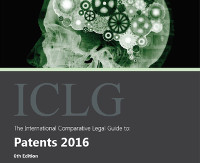 The 6th Edition of the ICLG The International Comparative Legal Guide to: Patents 2016 was published this week and is available on the Internet: http://www.iclg.co.uk/practice-areas/patents/patents-2016